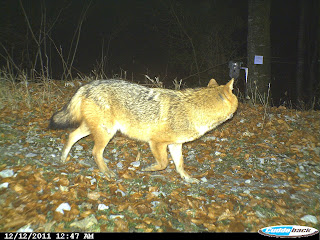 During the lynx monitoring in the northwestern Alps last winter by several camera trapping a strange animal has been mapped: similar in coloration and habit of a wolf, but obviously smaller and more compact, too big and too leggy for a fox. After consulting with several specialists it was confirmed that the photos show a golden jackal (Canis aureus). Is still pending final proof in the form of a genetic analysis, but we keep the recordings for the first tangible evidence of a golden jackal in Switzerland.


In Austria and Northeast Italy reproduction of the golden jackal is detected since 2007 . The evidence so far is from the northern German state of Brandenburg.
The animal pictured here was recorded between the 11/27/2011 and the 12/12/2011 by five different camera traps in the cantons of Bern, Fribourg and Waadt. Since then, no further proof was recorded.
Posted by GOJAGE member at 1:55 PM