On 2th, 4th and 5th of June 2017, Stefano Locatelli in cooperation with environmental police of the Province of Bergamo has photo-trapped a golden jackal in the High Val Brembana, Bergamo Province, Lombardy, North western Italy: Orobie Natural Park (Parco delle Orobie Bergamasche)
This is the westernmost record for the species in Italy, and the first datum for the region Lombardy. This datum, together with a single datum for Modena province south to the Po River, indicates that the expansion of the species is finally increasing also in Italy.

Actualization: 26th of June 2017
During the night 23rd to 24th of June 2017 a Bio Acoustic Monitoring (BAM) survey was organized in val Brembana by Luca Lapini toghether with Carlo Comazzi, Stefano Locatelli and Luigi Nervi (agent of Bergamo province environmental police).
The BAM NR and the results of the previous BAM survey near village of Mirandola, Modena province will be presented in GOJAGE e-Bulletin within a report of actual species movements in northern part of Italy, Po river basin. 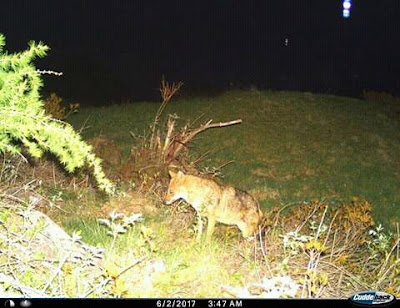 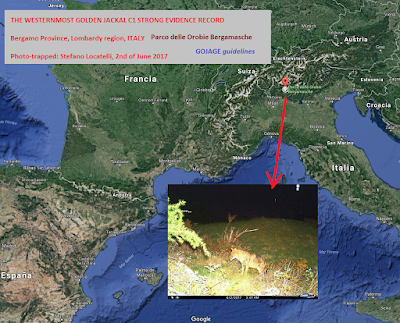 On 5th of June 2017, in the evening, a golden jackal has been video recorded by Raffaele Gemmato (field Ornithologist) near the Village of Mirandola, in Modena Province, south of the Po river. 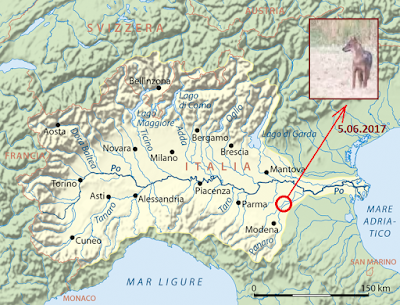 The video was sent first to Luca Giussani, then to Adriano Martinoli << Unità di Analisi e Gestione delle Risorse Ambientali >> who sent it to GOJAGE representative in Italy, our colleague Luca Lapini.

The video was uploaded in the mailing list of Astore a Friulian naturalistic association. It was analyzed and seems that the golden jackal is an adult male.
On Friday 9th of June 2017 a team will conduct BAM (BioAcoustic Monitoring) in the area and will analyze the ecological factors to assess better the last C1 (strong evidence) sighting.

Posted by GOJAGE member at 8:19 PM No comments: