A very interesting study describing the genetic structure of the golden jackal population in Slovenia was performed by Astrid Vik Stronen, Kristijan Tomljanović, Hubert Potočnik, and other researchers from Hungary, Austria, Croatia, and Serbia. It was published recently in Global Ecology and Conservation (Source: here).

It was found that a possible origin of recent jackal dispersion in Slovenia corresponds to sources from Serbia and Hungary and not to the Dalmatian cluster as it was hypothesized by the authors. Some results suggested a third cluster centered in northern Hungary.

The study is crucial to understand the golden jackal population movement pattern in Central Europe and new data from the Eastern countries would be of great interest to further explore the species biogeography in Europe.

Authors: "However, investigation of samples collected south and east of our study area will be required to obtain a better picture of gene flow within the Balkans and beyond, including the Caucasus (Shakarashvili et al., 2020), and can help determine the main routes of jackal range expansion across Europe." 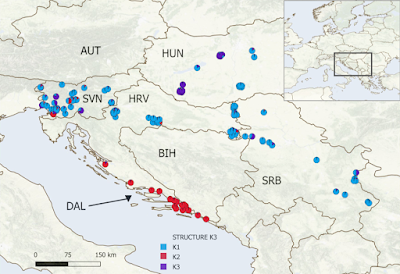 Source: Stronen et al, 2021: Golden jackal genetic structure from analyses in STRUCTURE for K =3 population clusters. The individual probability of assignment to a given population cluster (qi-values) is shown with pie charts placed at the sampling location of each jackal. 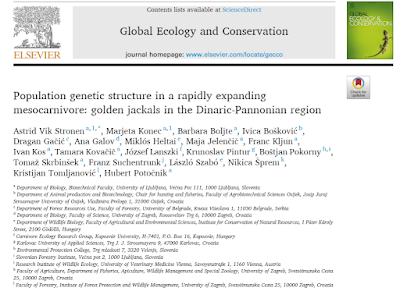 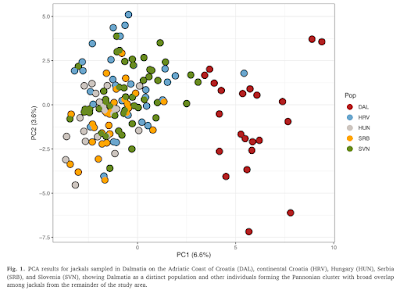