JACKAL IS NOT AN INVASIVE ALIEN SPECIES

Light at the end of the tunnel!

Golden jackals are on the focus of the EU Environmental Policies

The authors of the recent study by Rutkowski R, Krofel M, Giannatos G, Ćirović D, Männil P, Volokh AM, et al. (2015) named A European Concern? Genetic Structure and Expansion of Golden Jackals (Canis aureus) in Europe and the Caucasus and published in PLoS ONE  recommend that the golden jackal should be monitored and its favourable conservation status ensured in all Member States within the current species range. The authors suggest developing cross-boundary strategies for management and documents like those developed for Europe’s other large carnivores.

Now, based in this Original Article, the EU published a report on their weekly Science for Environment Policy News Alert, Issue 443, 21 January 2016 in which explained the legal situation and the reasons to do not consider jackals an invasive alien species. 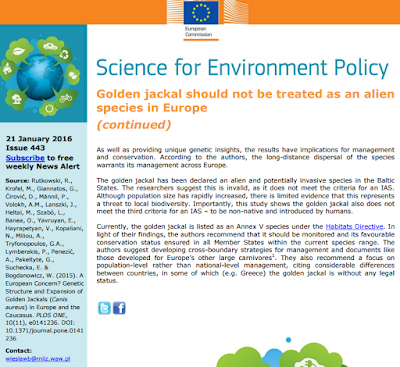 Posted by GOJAGE member at 6:32 PM No comments: 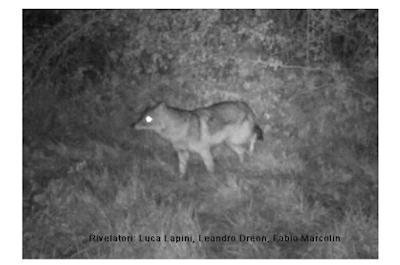 Together with L. Dreon and F. Marcolin, on 5th of December 2015 we attempted to stimulate jackal responses with a single standard jackal howling session near the garbage dump. At least two distinct specimens were foraging in the dump. They responded to the second and to the fifth stimulation, from different zones of the dump.

It is the first sure datum for the golden jackal in the province of Pordenone, indicating that at present there are at least four reproductive groups in Friuli Venezia Giulia region. The situation needs further researches, but also to be divulgated to avoid accidental killing, in Italy very frequent during fox culling.


REPORT HERE
Posted by GOJAGE member at 8:10 AM No comments: