The golden jackal on the way to Rome

Rome, 7 December 2021 – Unstoppable, the journey of the golden jackal in Italy.

"The Canis aureus left on a distant day dal Gange, after 40 years in our country he arrived in Tuscany. The one of Montemurlo (Prato) it’s just the latest report. The ‘street sweeper’ who eats everything is ‘undermining’ his most direct opponent, the wolf."

Video Source: here La Repubblica
"How many are and where
But how many are the specimens of this protected species? The Quaderni of the Civic Museum of Natural history of Ferrara have just published a study photographing the presence of the golden jackal with us. At the end of September, write Luca Lapini, Stefano Pecorella, Mauro Ferri and Marta Villa, “the species is currently widespread throughout northern Italy, at least as far south as the Province of Ravenna. It is estimated that they are now present in this vast area of ​​the Italian Peninsula 196-250 specimens divided into at least 37-47 territorial reproductive groups “. Then the sighting of Monemurlo was added. So today the canis aureus is lord in Friuli Venezia Giulia, Veneto, Trentino Alto Adige, Emilia Romagna and Tuscany.
The cities But our jackal does not disdain cities. From Udine to Venice, from Osoppo to Pordenone, from Trieste to Gorizia, from Modena to Parma a Reggio Emilia, “looking for poultry and household waste often collected around public landfills or ecological pitches, which he constantly frequents also to catch rats “(again from the Notebooks). Jackals and wolves
In common they have a passion for chicken coops. End. “We have the feeling that the presence of wolves can only slow expansion of the golden jackal. But evidently, they manage to coexist, at least at low densities – this is the analysis of Lapini, zoologist -. We are witnessing an unprecedented scenario. The beginning of the expansion of the Canis aureus was guaranteed by the killing of the Balkan wolves, reduced to the light in the mid-1950s. Now the expansion is very pronounced, mainly due to the fact that this is a scavenger animal, which finds the main source of resources in man “. And how is he distinguished from the wolf, with whom he continues to be habitually confused?” The most characteristic trait – warns the zoologist – is the white-collar at the base of the neck “.

Posted by GOJAGE member at 2:53 AM No comments:

The reproduction of the golden jackal has been demonstrated in Germany

"We got pictures from a photographer ... I checked the area to confirm the origin... I took my dog with me and she found 4 scats. I installed some camera traps as well. The cameras confirmed the cub. The genetic analysis of all scats resulted in jackal as well. In two of the four scats, the genotyping was successful as well and we identified two animals. A few days later we took genetic samples from a dead sheep (still dead for several days, thus proof for the use of the body but not for being killed) which showed another specimen. Last week my dog found another scat over there which resulted in the fourth specimen. We now have at least 4 jackals and three of them seem to be the pubs of the fourth animal, which is the father (genetically)."

This is a brief resume of what occurred from the 1st of October until the 26th of November 2021.

As presented in a note by the Ministry of Environment (here). 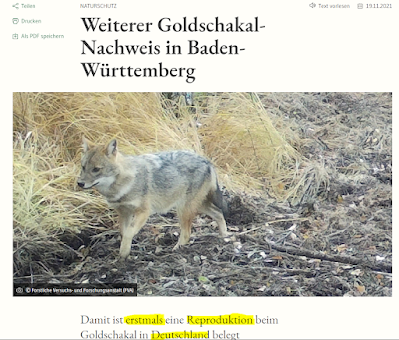 Posted by GOJAGE member at 2:36 AM No comments: