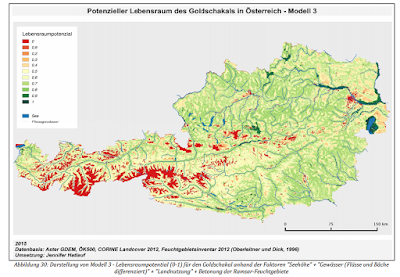 Mrs. Jennifer Hatlauf presented her Master thesis (Masterarbeit) Zur Erlangung des akademischen Grades Master of Science (MSc) in Wildtierökologie und Wildtiermanagement (Wildlife Ecology and Management) an der Universität für Bodenkultur Wien (March 2015).
Her work (below you can see an abstract in English) is based on actual European concerns and uses an extensive Bibliography. 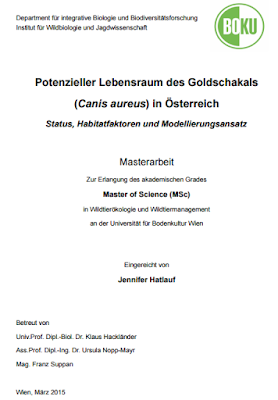 In recent years, the golden jackal (Canis aureus) is gaining attention in Central Europe and increased evidence confirms its distribution, also towards Austria. From the originiating countries of the Balkans it expands its area in a natural way (Schwarz, 2013). Previous studies show a large habitat plasticity, which leads to the question whether the golden jackal will be able to find permanantly suitable habitat in Austria.
As a result of a literature review this masterthesis presents the summary of identified factors that may play a crucial role in habitat selection of the golden jackal. Despite its generalistic nature, close to its opportunistic choice of food and its adaptability, it is possible to discern trends in its habitat selection: Its core habitat should therefore provide plentiful cover with varied structures. For example, shrub vegetation or small woods in close proximity to farm areas offer protection and adjacent fields provide sufficient food. In this regard, the intensity of agricultural management is essential. In some european study areas extensive agriculture is positively linked with golden jackal presence. In these regions the jackals are also known to regularly use arable land. However, the more intensive the agriculture, the less arable land is used by the golden jackal (Šálek et al., 2013a). Proximity to waterbodies presents another factor. A lot of records prove the presence of golden jackals near perennial rivers and wetlands (Banea et al., 2012). Likewise, lowland in general is observed as frequently used habitat and mountains with long, snowy winters might operate as barriers (Giannatos, 2004). Besides largely unexplored ecological contexts, these factors provide first indications for analysing golden jackal habitat. Based on a simple overlapping of mentioned factors in QGIS, three modeling approaches were developed. A digital elevation model, a waterbody and the CORINE Land Cover data set for Austria were used as database. Through equivalent combination of chosen factors and a generous assessment of the CORINE landuse classes, model one represents large areas of high habitat potential. This model points to the generalist nature of the golden jackal, but nevertheless, areas stand out. Model two focuses on waterbodies, especially on rivers. This is achieved through low valuation of high distances to streams, but hydraulic structures are not considered. With the complementary assessment of Ramsar wetlands, model three shows an even higher habitat potential of wetlands, than model two.
The resulting habitat potential analysis is a first estimate of possible habitat for the golden jackal in Austria and could introduce a basis of further research. The review shows that intensive research in Europe is still necessary to deepen the ecological knowledge of the golden jackal.
Posted by GOJAGE member at 6:29 PM