SISTEM 2012, is the name of autumn stage of European jackal monitoring in Romania and is part of GOJAGE 2 broader activities proposed to be performed in 8 countries of golden jackal home range in Central and SE Europe. These countries are Serbia, Bulgaria, Greece, Romania, Hungary, Croatia, Slovenia and Italy.

The action started on 11th Oct 2012 in Olt county, new region of jackal settlement in southern SubCarpathians. We did survey on Oltet river near Iancu Jianu, Morunesti, Morunglav, Ganeasa, Plesoiu localities but no answer to bioacoustic stimulation was recorded.

The importance of this step was that we participated in first serious TV documentary about jackal species in Romania, an investigation performed by DIGI 24 HD TV team lead by Romanian television journalist Andrei Udisteanu.

We installed 10 calling stations for future studies and we established important contact with local Game Management Unit leader, Eng. Gerard Matei (GMU Bals) and Sorin Paun (hunting terrain ranger).
We are very confident in the way of how Bals GMU (Ocolul Silvic Bals) managed jackal settlement announcement of the region and we recognize high profesionalism of this team.

We have to say that for Olt County (in Southern part of Romania) many news from written press show jackals as harmful carnivore and dangerous mammal without documented data and in a very unprofessional style. Jackals were presented as scaring people: "Oltenians threatened by jackals", as eating and killing dogs and as eating and killing 20 sheep of a local deputy. 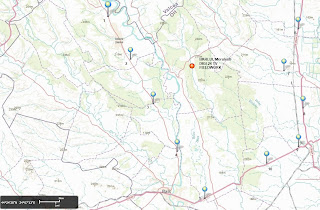 On second day we did survey in control area of Dobruja and we installed a new line (5 points) near M. Kogalniceanu locality and we performed survey in Lupilor levee, known area. In the morning we set the camera in a very important region of Danube Delta Biosphere Reserve with no jackal responses to acoustic stimulation, but with one beautiful video recorded individual (see above).
During 3rd night we performed survey on new transect between Crisan and Caraorman villages in the heart of Danube Delta. 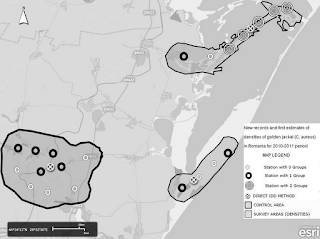 Conclusions:
1) We concluded that for this autumn stage complementary method as video trapping was very important when we look to an area where we know of the existence of territorial group and bioacustic stimulation is not appropiate due to unknown parameters.
2) Due to the lack of responses also in the control area (Dobroge) as on Lupilor, we do not give a major importance of the reduced number of jackal groups in Grindul Lupilor, but we advise new monitoring after 3 months period!
3) The fact that we got responses of jackals where human activities were increased and where released livestock and poultry were observed we think that jackal presence in Danube Delta Biosphere Reserve is very close related to human activities.
4) In areas where recent settlement by jackals was reported (e.g. Olt County) and supposed density is scarce, bioacustic stimulation should be reconsidered or performed in future to assess management and conservation measures derived by clusters´ levels dynamic.
5) We think that for Romania, in this period (mid October, 2012 year with late summer) the vocal behavior of jackals is observed for territoriality, more than for other comunications (mating, breeding). We heared responses only in 3 points of 33 surveyed this year, but when responses were observed, they came from well separate group and always followed by other groups. No answer were recorded at second broadcast when we played again, observation we all did before. No separate group(1 individual or group) was identified.
6) We suggest that transects with no responses should be removed from the final multivariate analysis, due to possible wrong induced stimulation associated with meteo conditions or other variable not known, yet. If we demonstrate the presence of jackal (with Giannatos technique) in one of the 5 points these transects will be considered.

Ecological network analysis, preliminary questions related to observations.
We observed 4 Enots (Racoon dogs Nyctereus procyonoides), 3 Northern lapwings, peweet or green plover (Vanellus vanellus), 3 Common Pheasant (Phasianus colchicus), where high density of jackal was observed. We can admit that jackals and racoon dogs can share the same habitat and that pheasants and lapwings (Nagâțul In Romanian) are not scarce in jackal specific ecological systems.
More and multidisciplinary studies together with ornitolgists have to be assessed and performed in bird communities nature reservations. We mentioned the late sightings of highly migratory ground nesting Vanellus vanellus which together with possible low jackal responses indicate that another monitoring session should be performed during the winter period to assess better jackal density levels. 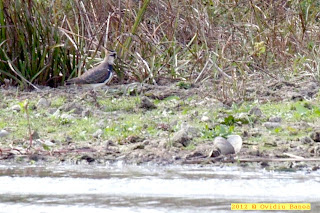 It is known that Vanellus vanellus prefers small grassland for breeding. The nest is a shallow scrape in short grass vegetation (del Hoyo et al. 1996). Management information Short swards are the most profitable foraging habitat for the species (Devereux et al. 2004) so the application of cattle-grazing (Olsen and Schmidt 2004), preferably intensively (e.g. > 1 cow per hectare), may be successful in increasing abundances of the species on grasslands. On coastal grazing saltmarsh however it may be desirable to exclude cattle from selected areas in the spring where the rate of grass growth is slow (Hart et al. 2002).